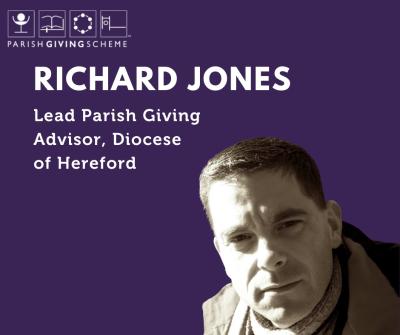 Now the online giving service is live, we asked Richard Jones, Lead Parish Giving Adviser at Diocese of Hereford, how it was being received by parishes.

Q: For those unfamiliar with the Hereford Diocese, how would you describe it?

A: The usual answer would be to describe the diocese in terms of its geography. The reality is that a diocese is a community of communities, and of real people! The Diocese of Hereford is a great place to live and work. The people are committed, generous, and often easy-going and laid back, very much at home in the rural surroundings that are such a part of life here.

We’re made up of more than 400 church communities with some exceptionally small villages. In fact, there are few large towns, and even our city of Hereford has a population of just over 60,000 people. It's a diocese of 1600 square miles from Monmouth in the south to parts of Telford in the north. We principally cover two counties, Herefordshire and most of South Shropshire. Interestingly, a number of parishes in Wales also form part of the Diocese of Hereford. We are the most rural diocese in the Church of England and that, more than anything else, marks the character of this place.

The whole population of the diocese is just 320,000 people. And this makes the smallest diocese by population in the Church of England other than the Diocese of Sodor & Man!

Q: How have you introduced the digital services to your parishes?

A: We were fortunate to be selected as one of the five pilot dioceses within the Church of England for PGS online. Before the online service was launched more widely, 20 of our parishes took part in a very useful pilot. We're absolutely delighted with the end result.

Since the 1st March we've been busily launching PGS online across all our deaneries; one by one. At a series of 13 deanery meetings over the next two months we'll be sharing news of the online service and demonstrating its features and advantages. We've already held six of these online deanery gatherings and have met more than 200 people. We hope to meet with more than 400 people by the end of the series.

Q: What reactions have you had from parishes, so far?

A: Much has changed during the COVID-19 pandemic, including many of the ways that we do things. It's brought forward use of IT and online platforms that might otherwise have taken much longer to find their way into the bloodstream of our local parish churches. Perhaps now online functions are not nearly so unfamiliar to some people as they were previously. This has meant that we've had a ready welcome for PGS online. Almost everyone quickly sees the advantages and opportunities it offers. Parishes are most excited by having their own bespoke PGS landing page where they can include details about their church, welcome people, and encourage them to support with a regular gift through PGS.

The increased functionality of PGS online as it develops further is also most welcome.

Q: Which of the resources have you found particularly helpful?

A: As a Diocesan Support Officer, I found the communications and resources that go with PGS online particularly helpful. We've made the most of promoting these as part of our deanery gatherings and presentations, including using the very useful PowerPoint presentation. I'd encourage others to do the same.

Q: Based on your experiences, do you have any learnings or tips that you’d like to share with other dioceses?

A: Like all other parish support work, it's important to make connections with as many people as possible; those people who are working to support and enable the life of the local parish church. My long experience in the world of giving and stewardship tells me that the most effective way to do this is not by simply sending out emails or attractive leaflets, nor by holding large-scale, single diocesan events. Instead, it’s always more effective to engage locally, perhaps as we're doing here with each deanery, to meet and talk to as many people as possible to make all sorts of connections and have greatest impact. One of the advantages of using video-conferencing platforms like Zoom is that this is so much easier to do so I’d advise others to do something similar.

Q: What do you feel is the potential impact for your diocese from the rollout of the PGS digital services?

A: Here in the Diocese of Hereford we're hopeful that PGS digital services will connect us to a whole new family of potential givers and that it’ll give existing givers more choice too. We've already worked hard to ensure that our PGS reach is extensive right across the diocese and within our local communities. PGS online helps us to extend that reach even further, more creatively and more effectively. It always good to give people a maximum choice of options on how to give. This increases the chances of engaging with a new giver, or perhaps somebody who has previously given in a different way.

We're also excited by the greater flexibility PGS online offers around how we communicate PGS locally. It’s so easy to offer a URL or QR code which links directly to the PGS parish landing page by simply copying and pasting it into all sorts of print and online media.

A simple link to accompany an appeal for giving, along with inspirational stories of the impact of mission and ministry couldn't be easier. There really are unlimited opportunities for encouragement and promotion of giving both within the church family and into the wider community.